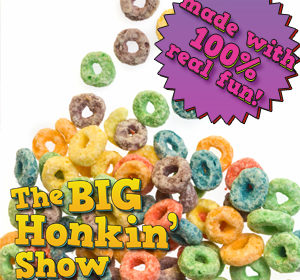 Due to the way these shows were recorded several episodes from this age of the Big Honkin Show are missing a chunk of the episode and it is lost to time. We are so very thankful for our remote producer and content provider Jimmy In Georgia for recording what he could given the limitations he had because of the internet at the radio station where the show was broadcast from. This show is missing a little over half an hour at the beginning but that doesn’t stop Steve from running his mouth overmuch. After a birthday shout out Steve puts the call out to start a band, discusses encores, talks about a 77 year old man who stole an ambulance. There’s TV talk with Steve’s thoughts on a couple of unscripted shows of the day. An eagle takes on a crocodile, and mice are singing or something. A dude gets hit with a crystal ball…didn’t see that coming. Steve gives his first real “What we’ve learned” in the form that it would take for several years to come. Commercials, obituaries, and local announcements and interstitials have been left in to keep the flavor of what people heard live every morning as they tuned in.